Why We Are Here by Nightswimming

An invitation to sing with other people, with a political/social/geographical bent. 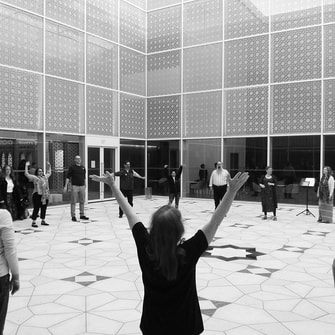 Why We Are Here! Is a unique and stand-alone experience that invites audience members to become a choir and sing in a site that they would not normally be able to sing in. Why We Are Here! Is Nightswimming’s site specific pop-up choir that places audiences at the centre of an exhilarating choral adventure - and they’re the singers.
Awards & Press
“Audience members walk away from WWAH! feeling elated and transformed because of the singing community that grows out of each performance” - Theatre Ontario

"In an age when the red states won’t talk to the blue states, when sports fans of the wrong team occasionally end up dead in the parking lot, when everyone is their very own brand and media outlet, Quirt and Julien created a show out of creating a choir out of the audiences who attend ​Why We Are Here." - The Half Step
Presentations
READ MORE ABOUT WHY WE ARE HERE