The Assembly by Porte Parole

A staged debate about democracy with a final act inviting the audience to speak their piece.
​Attended October 2018 at Crow's Theatre in Toronto, ON 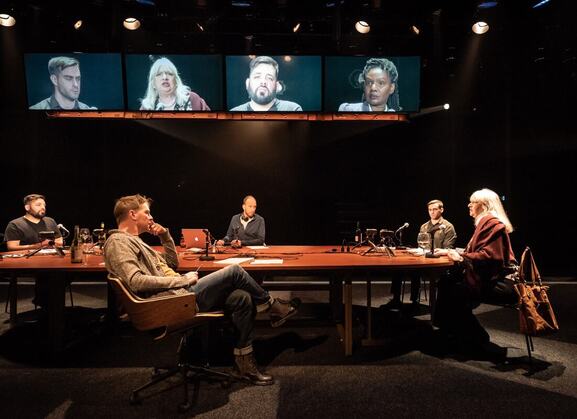 The Assembly – Montreal examines call-out culture, identity politics, free speech and, most provocatively, the possibility that the time for listening to each other is over.

Since 2017, the play’s creative team has been curating and recording encounters in which four Canadians of wildly different ideological leanings face off and collectively confront the issues that most divide them. Directed by Chris Abraham (Siminovitch Prize winner), The Assembly – Montreal is based on a dinner held in December 2017 where four regular people with very different political views debated the issues of immigration and free speech. The actors play these real life people whose conversations were recorded, transcribed and then edited to create a script. Brought to the stage in the fall 2018, The Assembly – Montreal was the very first Assembly created by Ivanovici, Soutar and Watson.
​
The Assembly is part of a long-term documentary theatre project that will create new and specific content for each touring city and include both French and English episodes.

The Assembly TRAILER January 2020 from Porte Parole on Vimeo.

"The Assembly is a fascinating attempt to dramatically present a difficult real life conversation around a dinner table of four 'regular' people with very different political views." - Toronto Star
​Presentations
READ MORE ABOUT THE ASSEMBLY