New Societies by Re: Current Theatre 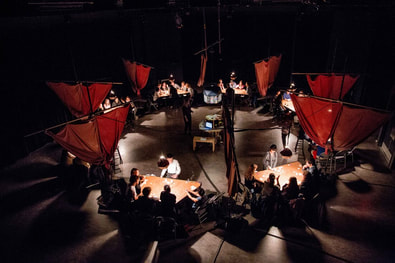 Concept by Brian Postalian, created with the company: Sena Cagla, Howard Dai, Alexa Fraser, Evan Medd, Hannah Meyers, Pascal Reiners, Amanda Sum, Meagan Woods, Montserrat Videla, and Laura Coons.​
​
​In “New Societies”, Vancouver/Toronto-based theatre company, Re: Current Theatre asks us “What if we could create our ideal society? What would it look like? Is it even possible?”

Drawing together the forms of a strategic game night and an advancing theatrical narrative, in a time of uncertainty and isolation, “New Societies” allows people to connect with one another and consider their own place within society. Shaped by the audience’s choices over an interactive Zoom video conference call, “New Societies” places players in groups to compete against or collaborate with each other in order to build their ideal society. Each group will be a newly formed society populated with up to six players and guided by a performer who facilitates the gameplay, interaction, and narrative.

Using gaming mechanics that you can easily find in analog games like chess, cards, board games, and role-playing games, and adapting their qualities to theatre, the team at Re: Current Theatre provide an experience that is inherently interactive and, most importantly, social. Echoing the contemporary political landscape, players navigate familiar and abstract decisions as newly formed societies. But they must be careful because as their choices shape the direction of their society, there are up to seven other societies also advancing, contributing to an ever growing and responsive political landscape.
​
Filled with humour and levity, this piece is a playful challenge to reflect on how we operate as inheritors of our current social structures, while giving players the opportunity to be the catalysts in crafting a better one.
​Presentations
READ MORE ABOUT New Socities