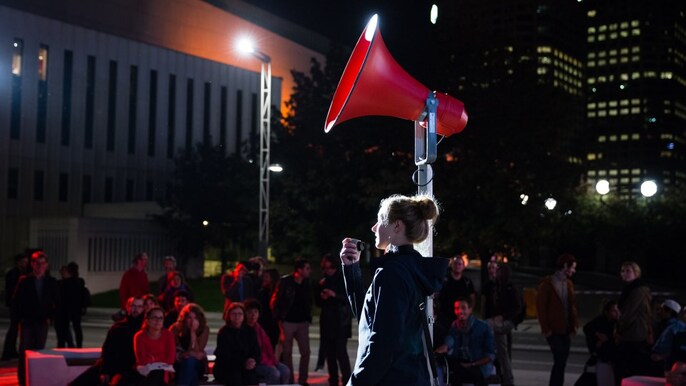 Megaphone invited Montrealers and visitors to gather and explore the festive side of public speaking by creating an interactive homage to Montreal’s strong history of public words and their contribution to shaping community and cultural landscape. Inspired by the lively public gatherings that were common in Montreal in the first half of the 20th century as well as the 19th-century British tradition of the Speaker’s Corner, this interactive installation illustrates the evocative power of citizens’ public speeches. At night, participants’ speeches turn into video projections and the public square once again becomes a space for impassioned debate. The installation invited participants to use a megaphone to speak out, watching their words transform in real time into images projected on the facade of the University of Quebec in Montreal, leaving their visual ‘footprint’ on the urban landscape. Visual effects of waves, scribbles, and distortions were generated by voice recognition software designed by the Computer Research Institute of Montreal.