Theatre-game hybrid that explores security, profiling, freedom of expression, and privacy in the age of surveillance.
Attended at the Carrefour international de théâtre festival in June 2017 in Quebec City, QC. 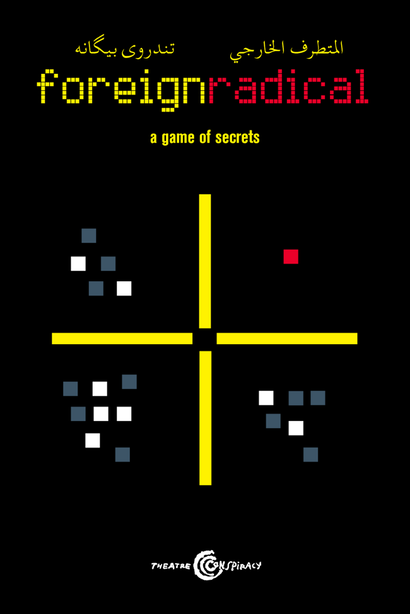 ​Foreign Radical invites 30 participants into an intriguing theatrical game that explores security, profiling, freedom of expression and privacy in the age of cybersurveillance. Mobile throughout the performance, the participants collaborate, compete, investigate, debate and spy on each other. The set is divided into four play areas where participants, depending on personal and group responses to various questions posed by the game’s ‘host’, witness different perspectives on the action. They are at times divided into groups or left all alone to gather evidence from dramatic scenes and documentary media that colour their views and how they play the game. An interactive, multimedia experience with multilingual elements in English, Farsi and Arabic, each performance is unique in that the audience dynamic influences the outcome.

Awards & Press
“The line between security and tyranny has rarely been so stimulatingly debated” - The Guardian
​
“This is a clever, provocative show. … Foreign Radical is urgent, timely and necessary” - The List